Mark is Right - Culture on Skids 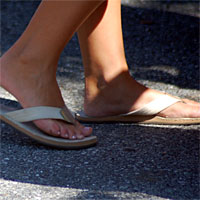 Mark is so right.

Flip-flops on men (with or without jeans <-- flip-flops and jeans, Jesus!): You're just lazy. You aren't at the beach. You are in Gaithersburg. You don't look cool. But, when you're wearing a rain poncho and jeans, you just look like a stupid wannabe frat rat but you aren't "moneyed" nor are you "preppy." You didn't go to boarding school. You cannot even name one Ivy League school. You don't surf. Your nasty, hairy ass toes staring at me in restaurants make me want to puke on you. If your age doesn't end in "teen," drop the flops unless you're at the pool or the beach. It's October. You're dumb.

Flip-flops on women: First and foremost, it's not hot. Period. [ . ] Not. Again, it's lazy. You're walking to work in a fucking suit and -- I pan down checking you out -- flip-flops! Totally not good. Makes me want to shove you down the elevator shaft. In fact, it might be as bad as seeing a nice looking woman light up a cigarette. JFG! <-- Just fucking gross! Again, if you're not in a bathing suit, then you are just wearing fat chick shoes (not nicely chubby, but morbidly obese to the point that you can't put on shoes). I do not have fantasies about taking you back to the crib for drinks because your cracked, blackened heels make me want to hurl. You're just lazy (and every time you put on flip-flops you are also a pig). At least I've seen hotties pull off Tevas. Thank god.

A Weakened Culture: It is no wonder the Bush=Lies team is so effective at scaring you into giving up your money and your rights to support their military-industrial-religious-petroleum agenda. You are weak, America! How do I know? I'm watching you and silently (and not so silently) judging you. It's October, right? It's cool and it's raining, right? This is what I call, uh, "normal." It's just rain.

Apparently, rain makes people 1) drive their minivans like absolute shit; 2) double park their SUVs at the Starbucks (tm); 3) complain vehemently that "it's raining!"; and, 4) look like they've run dry on the Zoloft (tm) and Prozac (tm). Cheer up, mates, it's only been raining for two days. Mopes! Hopefully no one crashes a plane into your office. What would you ever do (especially if it were raining - good thing it wasn't raining in NY on 9/11 (tm)).

The doctor has a new prescription for you: Go outside. Get wet. Smell the air. Listen to the birds. Take it all in then go back inside and dry off.

But, if you wear flip-flops you suck.