It was funny at first; the "Mac" guy and the "PC" guy. We all got it. It then became arrogant and self-righteous, which isn't so bad. My friend James just typed "the arrogance of Mac" this morning. Then it became just downright mean but we didn't care since it was mean towards Micorsoft.

You hurt your brand when you turn yourselves into a charactiture. That's bearable. But now, you've just pissed me off.

I know it's a business and you are in the business of making tons of cash. I get that.

But, this...this is one of the last straws. Especially when I wanted to read the NYT: 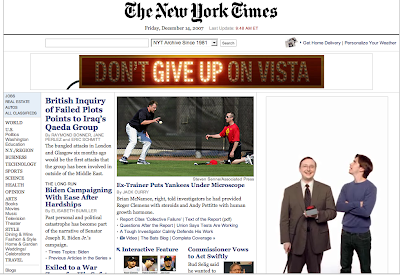 Yawn. You're Wal-Mart to me now.