The Coddling of America: 60 Minutes

The "Millennials" Are Coming 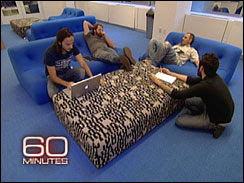 Morley Safer On The New Generation Of American Workers

"They were raised by doting parents who told them they are special, played in little leagues with no winners or losers, or all winners. They are laden with trophies just for participating and they think your business-as-usual ethic is for the birds. And if you persist in the belief you can, take your job and shove it. "

Sniveling pansies; lazy crybabies, I say. Not tough, not wise, not able to deal with non-optimal situations. Inconsiderate whiners. Don't get me wrong, one has to look after oneself nowadays, but shit, shut up sometimes.