[Update: Just a thought. Eleanor should get tons of credit and props. I've heard Matthew's solo stuff; not nearly as strong yet you'd instinctively give the "creative" nod to him. But, it's like that first Beggars Trail record...you don't feel the RJ vibe upon early listens, but you sure as hell miss it when it's not there.] 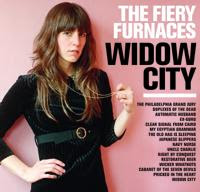 OK, this is not a record review, this is a reaction to Widow City (blah blah, the new Fiery Furnaces record released just this week by Thrill Jockey blah blah).

Good shit, man! No, that's selling it way too short. What's good about it? Firstly, this is what's bad about it; the mix. I'm not usually one to tic on somebody else's mix (since I SUCK at mixing myself) but I'm finding myself fiddling with the the mids and trebles to get some separation between instrumental voices, but it ain't helping too much, stuck in the mud (like I Like Smartbomb). So I just make it louder. That kind of helps. Maybe it's a crappy download issue, but since I already bought it, I'm stuck with it. I'm not buying it again. Blueberry Boat, Gallowsbird, and Bitter Tea were much clearer to me.

Anyway, the content is great. If I didn't know better I'd've swore that the siblings/offspring Zappa were making this, given the lineage. But, no, it's the Friedberger kids. Conceptually, there is so much going on that I couldn't quite describe all the voicing and instruments and polyrhythmic nuances. I do know that it's thick, way too thick to get all right now. I also know this: there is years of mining to do on this. I mean Blueberry Boat was made in, what, 2004, right? Still mining (and it's not like I don't know the nuances either).

Sequentially, Widow accomplishes what you'd want a good record to accomplish: begins with scene/tone setting, takes you on a trip, and then beats the shit out of your senses and sensibilities. And, it's definitely not for everybody, thank god. Kanye has no worries.

So, out of ten stars, I give it an, "I LOVE IT!" Or, to be honest, "I'M SURE I WILL SOMEDAY LOVE AND APPRECIATE THIS RECORD." That, my friends, is a high-order compliments. The highest compliment for me (which applies here) is: I'd like to play in that band.