"Dullard"? And A Twenty-Three Skiddoo To You Too 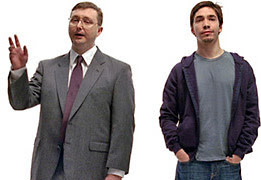 Newsweek: Are you bugged by the Apple commercial where John Hodgman is the PC, and he has to undergo surgery to get Vista?

Bill Gates: I've never seen it. I don't think the over 90 percent of the [population] who use Windows PCs think of themselves as dullards, or the kind of klutzes that somebody is trying to say they are.

How about the implication that you need surgery to upgrade?

Well, certainly we've done a better job letting you upgrade on the hardware than our competitors have done. You can choose to buy a new machine, or you can choose to do an upgrade. And I don't know why [Apple is] acting like it’s superior. I don't even get it. What are they trying to say? Does honesty matter in these things, or if you're really cool, that means you get to be a lying person whenever you feel like it? There's not even the slightest shred of truth to it.

Does the entire tenor of that campaign bother you, that Mac is the cool guy and PC—

That’s for my customers to decide.

Ha! I repeat, I have never owned a PC or anything that ran Windows. Yeah, I have a pretty kick-ass-for-a-PC set-up at work, but it doesn't even approach the shameless OSX imitator level. It's so funny, too, when people laugh at me for using Apple gear.