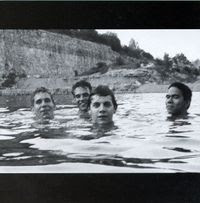 Spiderland. Slint. In that order. Period.

You actually don't need any other information. You either get it or you don't. Love it or not. But, it may very well be a best and a perfect album. Six tracks. Thirty-nine and a half minutes of some of the most exhausting, excruciating music ever. In fact, there's nothing I could write about it that hasn't been written (clicky).

I first learned about Slint and Spiderland in this SASHA FRERE-JONES New Yorker article from April 2004. Things sorta changed for me. Blah-blah-blah. Like Odelay perhaps. Those periodic albums that change things.

Anyway, at the time I read the article I couldn't immediately find the album (iTunes), so I found each of the tracks via Limewire. Downloaded the whole thing and have loved that record ever since.

I couldn't even tell you the first or last names of anyone in that band. I'd have a hard time even telling you the names of the tracks. But, I know nearly every nuance of the production. I've listened to it dozens of times if not hundreds (is that possible?). It's on the iPod and on CD in the car. It's on the computer at work. I've given it as a gift.

The purpose of this post, however, is full disclosure: Two days ago, I bought the album. It dawned on me that I never purchased the record, so I ordered it, paid in full for it, and received it.

I bought a CD. Oh, I actually bought two. I also got OutKast Stankonia. I've been meaning to buy that. I hadn't heard a track until yesterday.