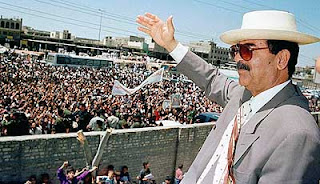 "...are we the only ones who think that all the concern about who captured the hanging on a cellphone camera is just a little bit beside the point?"

"Was it too much to expect that the Iraqi government, such as it is, could handle execution security as well as a bunch of rent-a-cops in windbreakers do?"

"Either Iraqi government officials are so completely inept that they couldn't control a single room within their country, or they chose to turn a blind eye to what was happening in it."

"...all the guy with the cellphone camera did was remind us of how ugly the transaction can be. The photographer documented the sorry spectacle of Saddam's hanging. He did not create it."