So, How're Things Goin' With You?

So, a friend asks another friend whom he hadn't seen in a while how things were...

“Oh, and here's a picture of my wife after they performed 12 hours of brain surgery in September. Blood vessel burst. BANG. Just like that! Who knew? She has a headache, I make her go to the hospital...turns out she's bleeding in her brain. She had an Arteriolvenous Malformation bleed. An AVM (as we call them) is a bundle of capillar 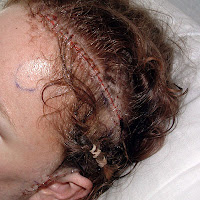 ies that never made it to brain tissue, so they bear the full weight of the arterial pressure and feed directly into a vein until it can't handle the pressure and bursts.

All is OK. She's alive, and if that isn't good enough, she has her vision, speech, and memory -- which they were worried about. So she's got that going for her. She's had seizures since the surgery, so we've had our share of ambulance rides. She almost had another one today; she could feel it setting in and then the anti-seizure medicine kicked in and it stopped. The only problem is that this medicine makes her nauseous and really fatigued. She had a huge seizure on the corner of 19th and K which ended up involving the Secret Service, Firemen, Police (off-duty and on) and an ambulance.

Otherwise life is good. What's up with you?”

Dang. Ain't a damn thing funny in these two paragraphs!