Q: Your views, Santa re: your kid?

Ty: Wave, good question and an even better observation. Ah, yes. The Santa scam. Funny thing, is for reference, I checked a couple of articles on the topic and heck if there weren't parents and psychologist referencing "the Santa myth" and kids of ages seven and nine even. Seven and nine?! What kind of retarded children are you people raising?

My kid is four and a half now and doesn't buy the scam other than milking what she can in terms of loot. Good for her too. I ain't raising no suckers. I'm raising the one that will make profit off of the suckers. Yes, there are two kinds of people.

Look, I played along for a while with the whole Santa thing. I even put out a bottle of Dasani (tm) and some cookies for "Santa" last year. But, frankly, I'm pretty sure the youngin is on to the scam. From bell ringing (begging) Santas for the Salvation Army (tm) to every mall Santa wanting to sell the deluxe package. 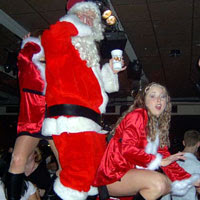 What-ever. She'll find out for herself. When she asks about Santa, I say something like, "that's the story." Making it clear that it's a story. Like religion, like unicorns, like a competent federal government. Stories.

She can play along and mention "Santa" "chimney" and "gifts." But, she knows that the list for goods goes to the parents and that Target and Child's Play sells that stuff.

So, my approach is to play along, but be honest with the questions. When she asked once, if Santa was real, I said no. She hasn't asked again. Good for her. Ride it out, darling.

Who knows what the best approach is, but she won't be seven years old taking about Santa like it's something real. Just a guess. - Ty