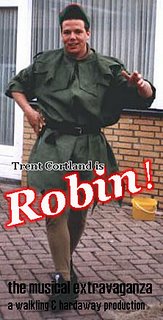 from Gabe (via Rich):

"I had the wierdest dream last night, the details are sketchy, but I do remember that the focal point was you describing a musical that you and Ty had written and filmed, and the central character was a gay Robin Hood. Regardless, we were dying laughing. It was hilarious."