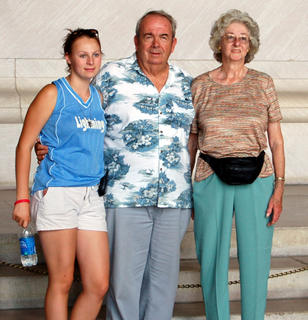 If someone beats you in a "rap battle" and it gets to you, and you practice more until you think you're really ready, you should challenge them again, and if you win, you will earn a lot of respect back. It's a great feeling. And chicks will dig your system and flair.

The World Is Watching

The protest Monday followed a massive demonstration Saturday that drew a crowd of 100,000 or more, the largest such gathering in the capital since the war began in March 2003.

On Sunday, a rally supporting the war drew about 500 people. Speakers included veterans of World War II and the war in Iraq, as well as family members of soldiers killed in Iraq.

Heck of a Job

Police in Germany are hunting pranksters who have been sticking miniature flag portraits of US President George W. Bush into piles of dog shit in public parks. Josef Oettl, parks administrator for Bayreuth, said: "This has been going on for about a year now, and there must be 2,000 to 3,000 piles of excrement that have been claimed during that time."

The series of incidents was originally thought to be some sort of protest against the US-led invasion of Iraq. And then when it continued it was thought to be a protest against President George W. Bush's campaign for re-election. But it is still going on and the police say they are completely baffled as to who is to blame. "We have sent out extra patrols to try to catch whoever is doing this in the act," said police spokesman Reiner Kuechler. "But frankly, we don't know what we would do if we caught them red handed." Legal experts say there is no law against using feces as a flag stand and the federal constitution is vague on the issue.

WHAT YOU CAN DO
Obtain your own supply of lawn signs. A Seattle printer (the source of the "Bush = Lies" stickers) is ready to run off a batch, 1.5 x 6 inches with two images, adhesive backed. To use you simply peel, fold around a stick or straw or branch or whatever, and place the flag. Note: A diagonal slash across the image creates an internationally understood message for non-excrement use (such as flower pots).

The cost? Cheap. Cost per sticker based on print run:

If you're interested, let me know the quantity and I'll order based on the total. Contact friends and add to your order! Great as presents, too (minus the dog shit).

"I think this is the most playful album you've done, and very entertaining...7, very Phillip Glass"

[ed. note: But, is it better than Cats? Yeah, busted, the trumpet and tuba chords are very Phil Glass, good catch.]


"I wish you'd stop putting Republicans on your albums (GWB, Arnold). It's such a fucking buzzkill. I know that's your intent, but it's harsh, like Rainy Day, Rain All Day."

[ed. note: All part of the GOP machine, my supple friends.]

BTW, I had a jonesin' for Doobie Bros. "Black Water." So, I actually bought it on the internets for a buck and listened to it. Good song, great production. That's all. Take me by the hand.

Not a diss; just weary of the whining.

Great musicians and all, great songs and such, but whine-y nonetheless.

Maybe it's me. Maybe I'm past the angst.

You arrive from wherever - school, work, the grocery store - and you see it; the FedEx envelope. You have a vague idea what's inside: more of that jumbled, incomprehensible, and wholly unlistenable crap that Ty keeps sending.

Politely, over the years, you've provided generally supportive feedback on his so-called "record albums," not that you can stand listening to them, but he's a pretty good guy and you wouldn't want to crush such a fragile ego. But, another? Holy god!

You figure that as long as he keeps himself busy making these things, he stays fairly quiet, somewhat distant and out of your hair. What does some occasional feedback hurt: "Uh, yeah, hey...that's some...fucked-up shit there, uh, Ty...you, eh, really made a...record there."

It's not like you've ever said the words I-like-it-send-more or anything. But, some people cannot take hints very well. And, somehow, "that's fucked-up" seems to encourage more; like somehow you've subscribed to Ty's crappy record spam list or some shit. What gives, huh?

But this year was the absolute worst! Two records?! Jesus! Inexplicable and unacceptable (hopefully he doesn't "tour" or anything). Doesn't he fucking have a job? Doesn't he spend time with Anne or Bren? And, I know Anne ain't listening to that garbage.

You consider moving, but where could you hide?

So after a week or so of guiltily walking past the opened FedEx envelope on a table or desk or magazine rack or something, the time arrives when you really feel the pangs of obligation. Not that Ty's waiting to hear back from you on how much you love the new record (like he listens - he's moved on the next "project")...but, oh god, it's time to actually listen to it (just once) so you can honestly say, "Hey big guy, yeah, I listened to that damn noise. Say, I'm moving to Botswana soon and I don't even know the address yet...but, hey, I'll call or something..."

And, they're usually so fucking long too; as in One Long Ride.

As you sure as hell wouldn't want to be caught dead listening to or overheard listening to crazy people music you dig out the good headphones ('cuz at least you know there'll be some buried stuff to pass the time - maybe even your voice or your dog's bark or something). And, since the only way to tolerate this made-up bullshit (what music school did he go to again? University of What the Fuck?!) you have to be fucked-up on something; whatever you've got will do.

After a drink or two and a bowl (or some random pills and snort of pocket lint) you finally steel yourself to 'do this shit!' If you're lucky, he'll have sent you a blank disc.

Lettir rip, suckers. Oh god, why do I do this?

"The Modicum of Decorum" is now available

tKoL is ty, rich, dave wave, and a whole bunch of other humans and stuff 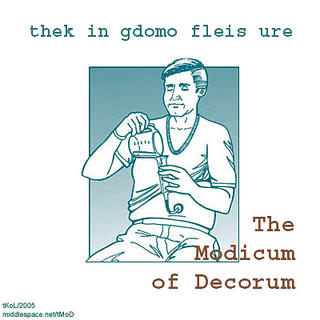 Also available from The PowderMonkey:

take the branches off the trees

This is the New America 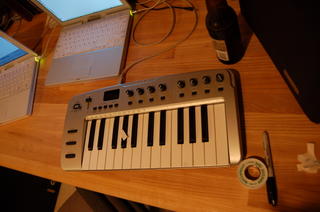 "The yellow light is the path to freedom."

That time is here when you know. At least you "feel."

There's nothing left to do to this record. It's done. But, you're never sure. I could add some sort of people-cussing-in-Korean kind of thing here, or some sort of modified-modified effect there. But, would that be too much? Is is right?

You just gotta know when it's done. You can hear when it's right.

Now what? Cover art? Whatever, no one ever cares as much as you do (just enough to get into their iTunes and iPod; easy enough). Text? Why explain everything and that's never been my style... Packaging? Who the fuck cares? Wrap it in Saran wrap, whatever.

But, what if it sucks? That's the chance we take. This is what we do and this is how we do it. Don't like it? It's a big world, go listen to something else.

Dammit! I did it again (again)

Why can't I stop listening to this fucking record?

Rap battle is on!

How I Fucked Everything Up (again)!

So, I made some mix adjustments to Track 10. I felt that track was finally finished. That makes 10 of 11 tracks finished of this new record [Called The Modicum of Decorum (The M.O.D) for now].

I burned the tracks to CD (minus the disaster that is Track 7) and took it home to listen later). Later, I grab a portable CD player and The M.O.D and another disc for levels reference. The plan is to listen to this other mass-market CD for a while then listen to The M.O.D to see how levels compare. To know if base levels are too low or weird or whatever. It's something you gotta do.

Here's how I fucked everything up:

The disc I randomly grabbed was Kanye West's new record, "Late Registration." I did notice which disc it was, but figured that since I hadn't listened to much of it yet, it would be a GOOD reference disc. I only bought it (downloaded) because of his stoner rant about our president: "George Bush doesn't care about black people."

Anyhow, I was wrong.

I listened to Registration long enough to know that it is one hell of a record. Sonic-wise marvelous and wide and bold and all that shit, right? I still haven't processed it enough, but it might just be a monster. In fact, I got caught up and forgot what the exercise was. Once I remembered, I swapped discs.

Fuck. I was demolished! I thought I had to go back to the drawing board (or the mixing board, seriously). The M.O.D felt so flat and weak and little....I felt it was a complete waste of time.

Oh, but Late Registration is huge. Much wider than nearly anything anyone's ever heard before. I didn't realize this at the time. I grabbed the most wrong reference disc possible. Then again, maybe it was the perfect reference point...something to build upon. 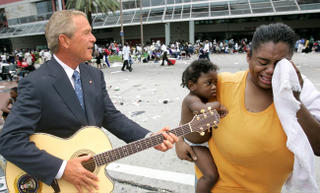 Voodoo Chile or When the Levee Breaks? Whachu wanna here me play next?

"America's world dominance is over...get out your chopsticks."